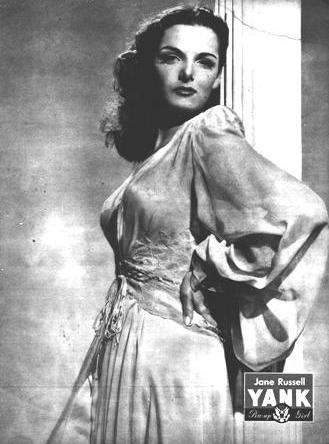 On February 28, 2011 the world lost an iconic beauty. Jane Russell was the original bombshell. She was voluptuous, witty, and sharp as a tack. The woman didn’t take guff from anyone. Her on-screen presence raised some eyebrows – and pulses – in her bosom-bearing roles. Her first feature film, The Outlaw, had Hollywood censors sweating. They delayed the release of the film for nearly three years.

When it finally reached a general release, the world met the original bombshell. Russell went on to star in films along with greats like Marilyn Monroe, Frank Sinatra, and Clark Gable. She was a vixen of the screen and held her own next to some of the biggest boys in the limelight at the time.

I was lucky enough to meet film critic and WITASWAN (Women in the Audience Supporting Women Artists Now) founder Jan Huttner last semester in my film class. I was even luckier when she asked me to write a tribute for the fabulous Jane Russell.

The finished product is up and I am so excited to share it with you! Please follow the link to see my first published assignment! Jane Russell Tribute (PDF)