PopCap may be the kings of the casual game. Plats vs. Zombies, Peggle, Bejeweled, the list of fun addictive games that everyone from your grandmother to your six-year-old nephew can’t stop playing is extensive.  Odds are you have played Bejeweled at some point; Bejeweled Blitz Live isn’t even the first iteration of the classic puzzler on Xbox Live Arcade, and in many ways it’s a game you already know.  So the question than is whether Blitz is a worthy addition to the franchise.

The game offers two variations of the puzzler.  The classic version; match three or more of any corresponding jewels of the same color by swapping the jewels with another next to it, in any one of four directions (requiring the match to be made or the swap will not work).  The other version, Twist, allows you to rotate groups of any four jewels either clockwise or counter clockwise in order to make your matches, but does not require a match to make the rotation.  Both versions have rounds that last for only a minute (hence the “blitz” in the game’s title) and can be played solo or in multiplayer. Multiplayer offers split screen and online battles as well as “party” mode in which you play the game solo but are constantly competing based on overall score against several other players.

The interface is sleek and colorful

Twist allows for more strategic attempts at making matches, but matching is ultimately slower than the classic version. With practice, making the right rotations does come easier and quicker, but I never came close to achieving any achievement worthy scores in Twist. (100k or higher) Ultimately though Twist does serve to offer a welcomed variation in gameplay, and I imagine for some gamers the version will be the easier/favored of the two. I can’t image anyone reading this who hasn’t at some point played the classic version, so I won’t go into too much detail on it.  In either version, the short game rounds make each game a frantic search to match as many jewels as possible as quickly as possible using power-up gems and quick on the fly strategic movements.

There are really two things that define a good puzzle game; the ‘I’ve been playing how long’ effect and the ‘just one more game’ effect.  Bejeweled Blitz Live does both of these fantastically well.  When you stop playing for a moment to take a look at the clock only to realize that you have been playing for three hours straight you can’t help but be impressed by a game’s ability to pull you in, especially for any game where the rounds only take a minute to complete. Those same short rounds contribute to the above-mentioned ‘just one more game’ effect.  The rounds are over so quickly that it is incredibly easy to just keep playing… and playing… and playing. For the most part the short rounds work in the game’s favor, but in my mind they severely inhibited the multiplayer function. 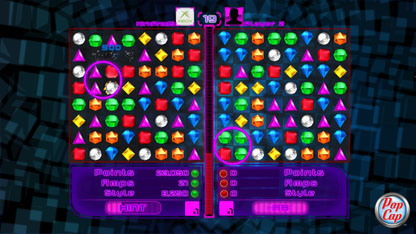 Battle mode is fun but too short.

Playing online battle mode will often consist of spending 30 seconds finding a match to play a one-minute game.  While the multiplayer, the party mode and even the fact that your friend’s scores (should they also own the game) are displayed often adds layers of competition onto the game (a great addition to any puzzle game), it falls short in some ways.  The friend scores appear to reset weekly meaning that if your friends don’t play the game regularly you will often have no (friendly) scores to compare to.  The party mode is very disorganized and while an interesting way to play the single player mode competitively, it doesn’t offer much in the way of a true multiplayer component.  As I hinted at before, the battle mode will often result in almost as much time matchmaking as playing, a shame really since the battle mode is certainly a worthwhile addition.  Battle mode scores you on three different qualifications, but really it just comes down to making more matches than the other player, and again, it is over incredibly quickly.  I found myself wishing battle had been made round-based as I think it would likely work much better; something as simple as three rounds to determine a winner would make the online matchmaking more worth the time while keeping the short hectic pace of the game. As is, it is a fun change-up from the solo mode, but most likely won’t be the aspect of the game you find yourself most drawn to for very long.

The last big issue that can be taken with Bejeweled Blitz is that in many ways it feels like a game where luck constitutes about 90% of your success.  While the actual number is likely far lower, the key is that the game often leaves you feeling like a lucky drop will do more to raise your score than any move you make, no matter how strategic.  There is some truth to this as I had multiple games where I made constant matches and ended with a rather unimpressive final score around 20k and games where one or two moves resulted in long unintended chains and power-up gems that resulted in scores upwards of 100k.  That isn’t to say skill doesn’t improve your results; my average was close to the 60k mark after a couple of hours but if I had gone by the first couple of rounds it would have been closer to 6,000.  And while I can’t ever imagine me getting to the point of scoring in the 200k, 300k range some of the achievements require, skill definitely does play into the occasion.

I wish I could say I did that on purpose.

In short, Bejeweled Blitz is a more frantic, intensity driven version of a game we all know and love.  It is a fun, challenging puzzler and you can easily lose yourself for hours in it.  It has faults, and features that feel at times incomplete or lacking, but the puzzle mechanics are exceptionally well done, as you would expect at this point from PopCap and essentially unlimited replay-ability for fans of the genre. That’s where the real value of the game shines through.  There is no “end” in any traditional sense to most puzzle games, so as long as the gameplay is enjoyable you can get a lot of value out of these types of games, and Bejeweled Blitz certainly proves that point.  If you’ve wasted company time playing Bejeweled in the past on your work computer, but want something just a little more intense for your home gaming, Bejeweled Blitz is without a doubt the puzzler for you.  If you are looking for a heavily skill and strategy based puzzle game with a solid multiplayer experience, Blitz is likely to come up a bit short for you.