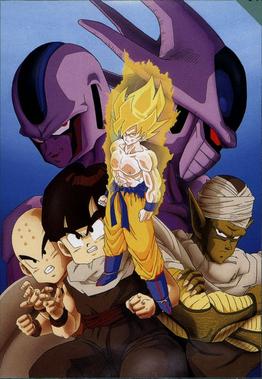 Oh, a good one again! Finally. So, this one is an interesting case. It’s no less derivative than Lord Slug in places and yet it’s still fun. For whatever reason, the fanbase (including myself) really likes this one, and I might have a theory. We

open on the tail end of Bardock: The Father of Goku, Frieza destroying Planet Vegeta and most of the Saiyans with it. Watching from a distance is Cooler, Frieza’s older brother. While watching Vegeta’s destruction, he sees a nearby pod escaping the planet’s destruction: Goku’s pod. Out of spite for his brother’s carelessness, he chooses not to intercept it and lets it go. Yes. That is indeed a there, and we are going to it. 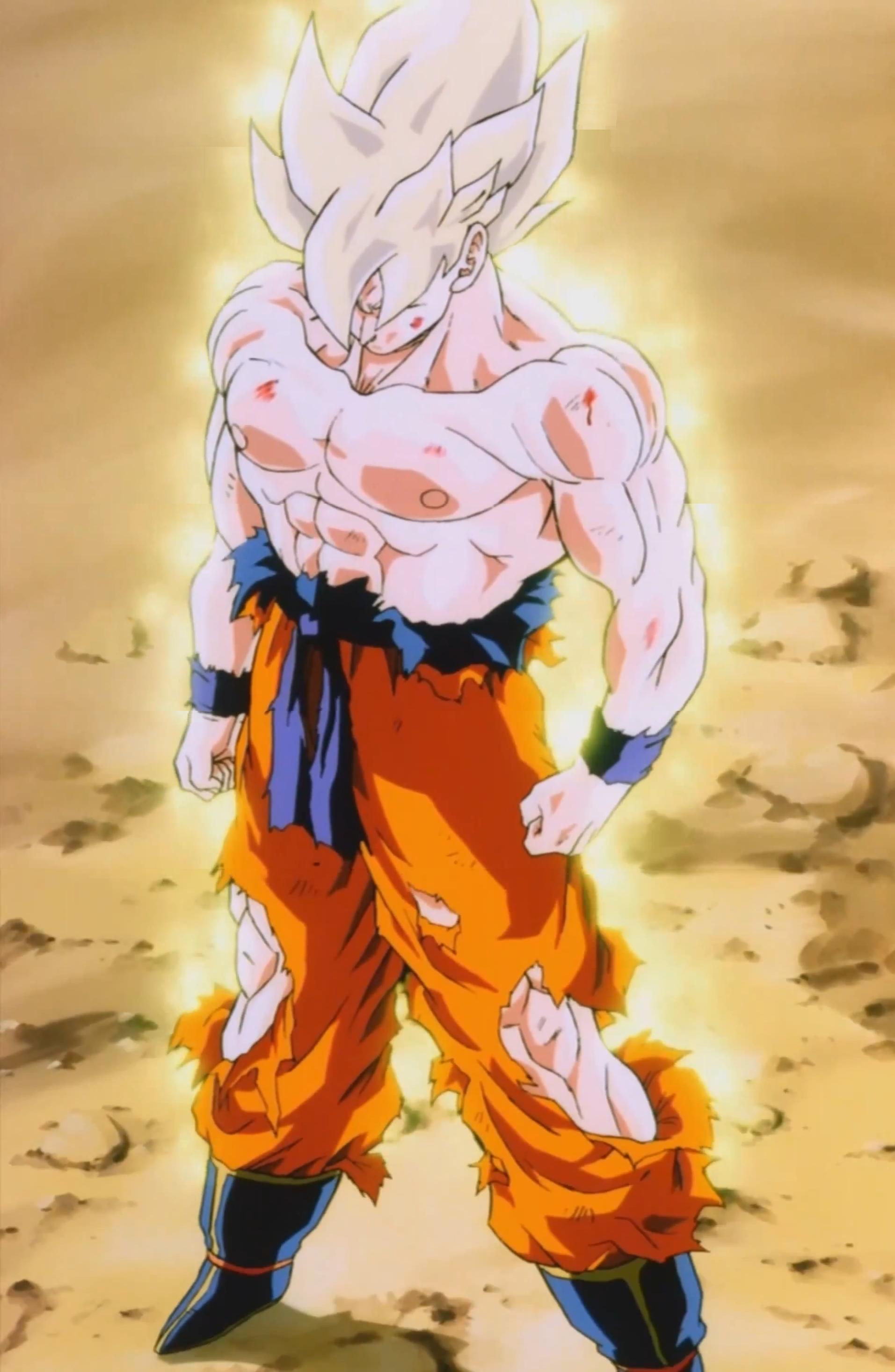 Years later of course, Goku has defeated Frieza (not killed, as we’d learn later). Cooler catches wind of it and decides to travel to Earth to make it even, less for Frieza’s sake and more for his family’s honor. Goku is badly wounded in their first encounter trying to protect Gohan and so it’s a race to Korin’s Tower to get him some Senzu Beans while Cooler’s Armored Squadron are on the boy’s tail. When you boil it down, discount Frieza with a discount Ginyu Force arrives and prompts a discount clash with Goku, ending with him going Super Saiyan. It’s the J.J. Abrams approach to a Z film. Then why do I like it so much?

Like I said, I have a theory. At least, for American fans. With all respect to Pauline Newstone and Linda Young, neither dub really did Frieza any justice. I myself never really took a liking to the character until reading the manga and eventually watching the series in Japanese. We wouldn’t get a proper portrayal of the character until Chris Ayres came around for Kai. However, while Cooler’s a carbon copy, he’s a carbon copy of a more accurate portrayal. While not completely on point, it’s a closer representation to the intent of the series then we had at that point. Regal, but sadistic. Sprinkle in an edgier design and tie it to a beloved special and you’ve got yourself a fan-favorite villain.

An interesting tidbit about this film is that it actually premiered before the fight with Goku and Frieza had concluded in the anime. I find it hilarious that there’s all this fuss over Goku beating Frieza when you wouldn’t even have known how that came about. You don’t even know how Goku got back to Earth to begin with. It’s the most likely reason Vegeta is non-present and Goku doesn’t have Instant Transmission in the film, as that material wouldn’t be available yet. Again, Toei jumps the gun. This will not be the last time.

P.S. Remember what I said about Disturbed in Lord Slug? Well… Deftones and Drowning Pool in this one.

Annnnnd we’ve fumbled again. There’s tend to be a pattern with these movies that whenever we go a little too

sensationalist sci-fi, it never really works. The World’s Strongest did it first, and now we’ve done it again. This film certainly contains a handful of winks to better films and cute as they are, they don’t help. So turns out a sentient, symbiotic machine planet called the Big Gete Star has been travelling throughout space, assimilating technology. Upon coming into contact with Cooler’s remains after his fight with Goku, Cooler’s consciousness takes over the entire mass, and he is reborn with a sleek, new metal body. He steers the Big Gete Star into New Namek in order to absorb it for fuel just as Goku and a handful of others are on their way to visit the Namekians.

So you know how Cooler’s entire motivation in the last film was spiting his brother, and making sure people knew who was the superior fighter among their clan? Well, he’s now returned in a new metal form and invading Namek. Frieza already ticked both of those boxes, so it makes his hubris in the last film even funnier. Although we see some much-needed teamwork between Goku and Vegeta in trying to subdue Meta-Cooler, this film ranges from sleek to ugly at the drop of a hat.

While not as quite as ridiculous as The World’s Strongest, it exceeds Lord Slug in terms of shoddy retread, despite the efforts it makes to separate it from the other films. It sort of just sheds that goodwill built up by its predecessor. It doesn’t plummet to the same lows as Z Movies 2-4 but it could be a lot better. 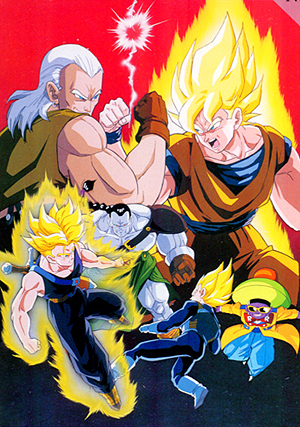 So Cooler’s Revenge marked the first time we’d see the Super Saiyan transformation used in one of the movies. The

Return of Cooler was the first time Vegeta had been in a movie, giving us two. Naturally per rules of escalation, we need three Super Saiyans for the film after that. That’s exactly what we got. Goku, Vegeta, and Future Trunks were at the forefront of the series at the time, so naturally they get top billing in this one.

We open on a reanimated scene of Android #17 killing Dr. Gero, revealing a super computer just underneath the main

lab. This super computer is programmed to carry out his will in the event of his death, and completes work on Androids #13-15. After #14 and #15 confront Goku and Trunks in the city, the Saiyans lure them into an uninhabited arctic area for the remainder of the fight.

Okay, I’m going to say this now. The dub for this movie is hilarious. Given the Androids introduced here have little-to-no personality to speak of, the dub goes out its way to make them a lot more colorful, including giving the titular #13 a hammy Southern accent. Story-wise, there isn’t much to chew on, as we’ve come to expect of these. Action-wise however, there are some standout moments here. This was actually the first Z movie I ever owned as a kid, so I’ve seen it more times than I care to admit.

It’s not a particularly memorable entry, especially given the TV special and film that immediately followed it. I have a soft spot for it, though. It’s got some solid Saiyan trio shenanigans and in my mind, one of the most memorable finishers in these. Better than The Return of Cooler, not as good as Cooler’s Revenge. Definitely not as good as what’s coming.

The History of Trunks
(Defiance in the Face of Despair!! The Remaining Super-Warriors: Gohan and Trunks)

So, with all the praise I gave the last special, hopefully this one would be as good, right? Well, it isn’t… but only by a bit. This is an origin special for Future Trunks, based on a side-story in the manga. We open on Goku succumbing to a radical heart virus which kills him, something we only heard Trunks talk about when he first met the Goku in the timeline we know. One of the recurring issues with Dragon Ball, particularly when it transitioned to Z (or just the Saiyan arc in the manga) is a lack of tension and stakes when the Dragon Balls provide such an easy out. One of the reasons the first TV special worked so well was that they weren’t an option, and it’s no different here. The Dragon Balls cannot revive someone who passed away of natural causes, so bringing back Goku wasn’t going to happen. When the Z-Warriors were slaughtered, Piccolo was among them, so Kami died too. The balls are inert (brownie points for whoever gets that old chestnut) and the Namekian ones are inaccessible.

The only remaining fighters are Gohan and Trunks. That’s it. Everyone else is gone. Android #17 and #18 have laid waste to most of the world and both of our leads are severely outmatched. Thanks to what Trunks has already told us in the series, we know Gohan’s days are numbered too. You know what’s about to happen, and when it does happen, it’s arguably the most heartbreaking death of the series. At minimum, it’s right up there with Krillin’s death after the 22nd World Tournament and Piccolo sacrificing himself for Gohan during the battle with Nappa. Except you know he’s not coming back.

This special is brutal but it falls short in some minor areas compared to the last. One, there are some leaps in logic as far as the way the world reacts to the Androids, we’re supposed to be in a dystopian setting the likes of which the series had never seen before and yet townspeople seemed to be going about their lives while this global threat writes off every city they pay a visit to with little mercy.  We see people at an amusement park instead of military formations and underground bunkers. It’s almost as if they were too afraid not to dial back the levity at the expense of tonal consistency. Bardock was also a more unconventional protagonist for the first special, whereas Gohan and

Trunks are almost exactly as we know them now, albeit a little more hardened in the former’s case.

Still, this is a cut above all of the movies up until this point and remains higher than most of the films to come. It also provides a better background for Trunks and helps you appreciate his conviction in the series. As an adaptation, it also has a little more bite than the bonus chapter it’s based on.